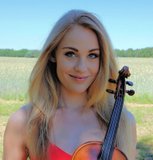 The violin has been my faithful companion since I was 4 years old and started at the Suzuki Institute.

During my childhood I traveled around the world to study with international master teachers and I have won several awards at music competitions.

I express my music through one of the world's best violins - a 300-year-old instrument built by the Italian violinmaker Matteo Goffriller.